On set measurements and Camera data for the background picture

The scene takes place in the forest, it is slightly darker environment then an open area.
The fallen tree in the scene is casting shadow towards  the left side. Also the trees in the forest were casting visible long shadow. The brightest part of the picture is the background where the sky is visible through the trees.
There were some pieces of garbage on the forest ground, which I roto’ed out in Nuke. 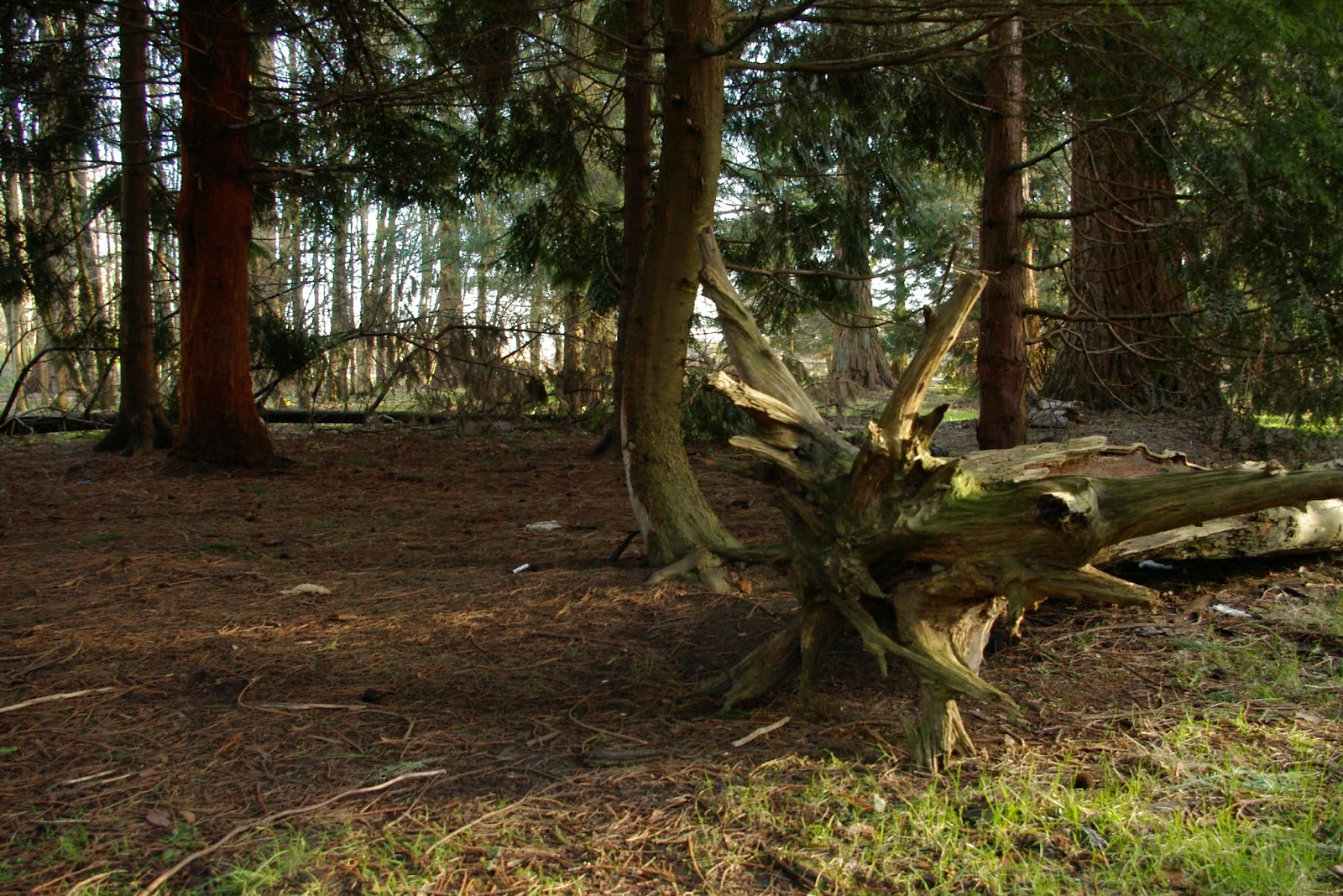 I used three Lighting types in Maya to recreate the light atmosphere of the spring sunny day in the forest:
- Directional Light representing the Sun, casting light in one direction and creating long shadows
- Area Light to light up slightly more the Shield with the Sword to make it brighter
- Image Based Lighting which I used to create the basic colours of the forest. Doesn’t produce any highlights nor shadows. It is just to give the scene overall feeling of the colours of the forest.
At the end, it did not make any really significant difference.
For this purpose I used this picture which I made myself on that very location: 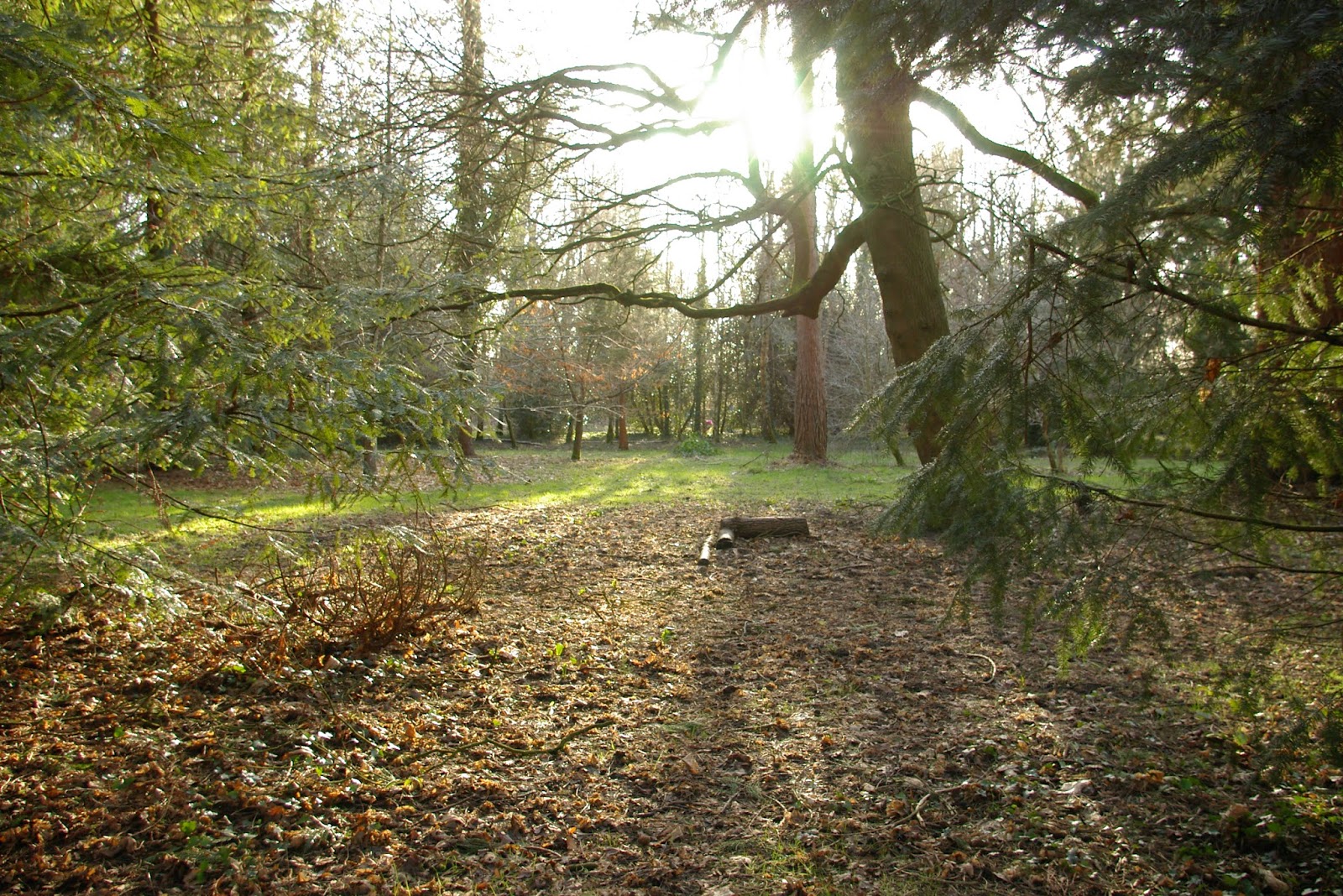 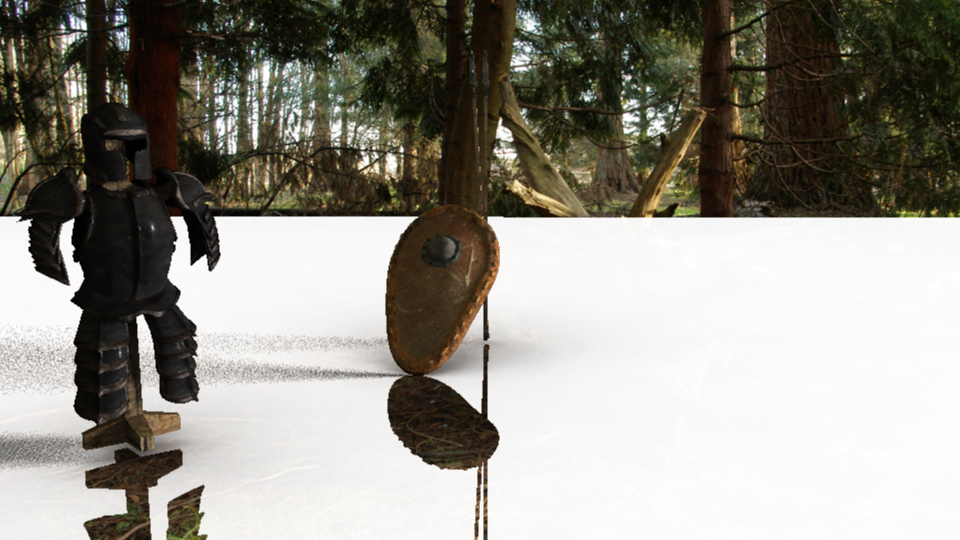 I used a plane on the ground with ‘Use background’ shader to project the shadows of the object in the scene.

All object set in the scene, in their final position.
The plane on the ground is showing reflection of some of them. 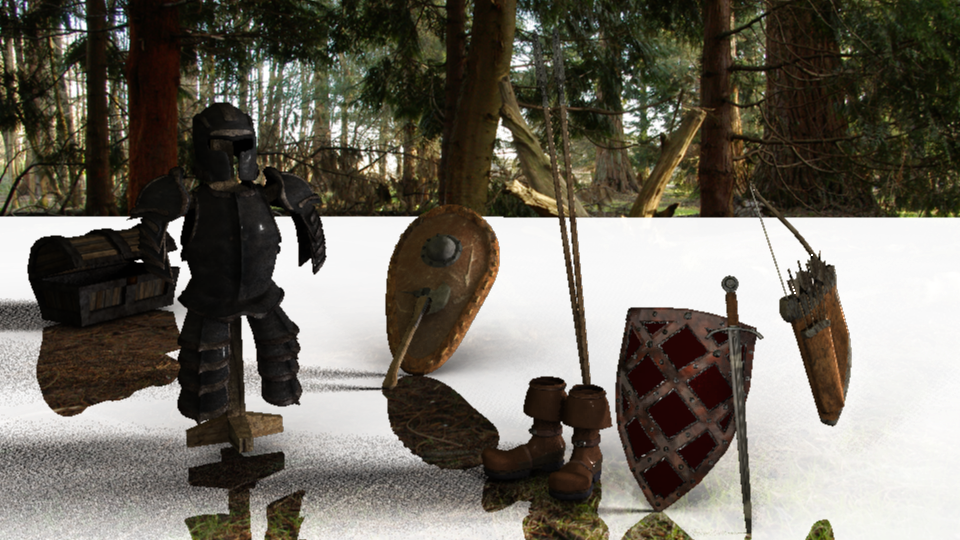 No effects done yet. 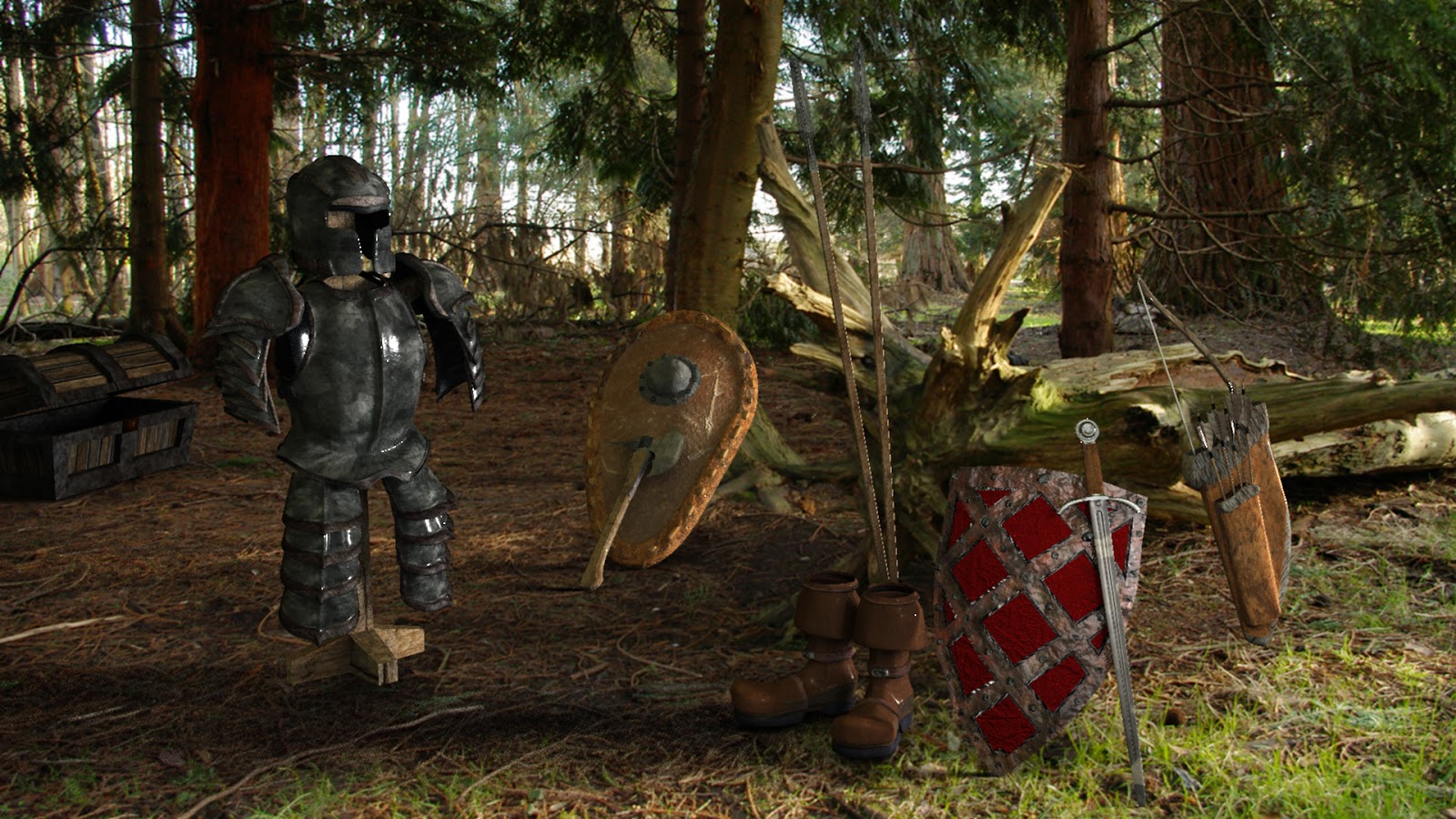 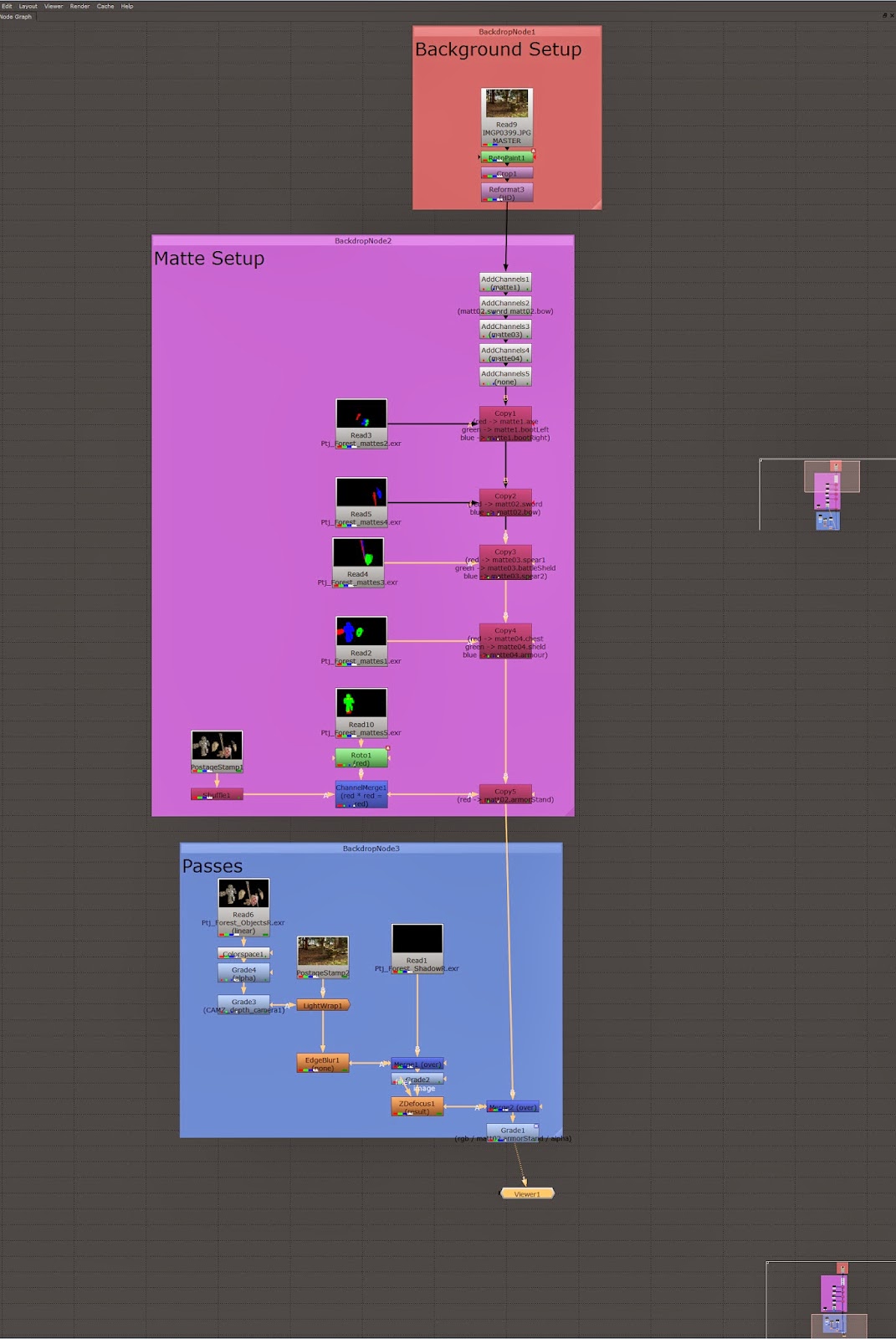 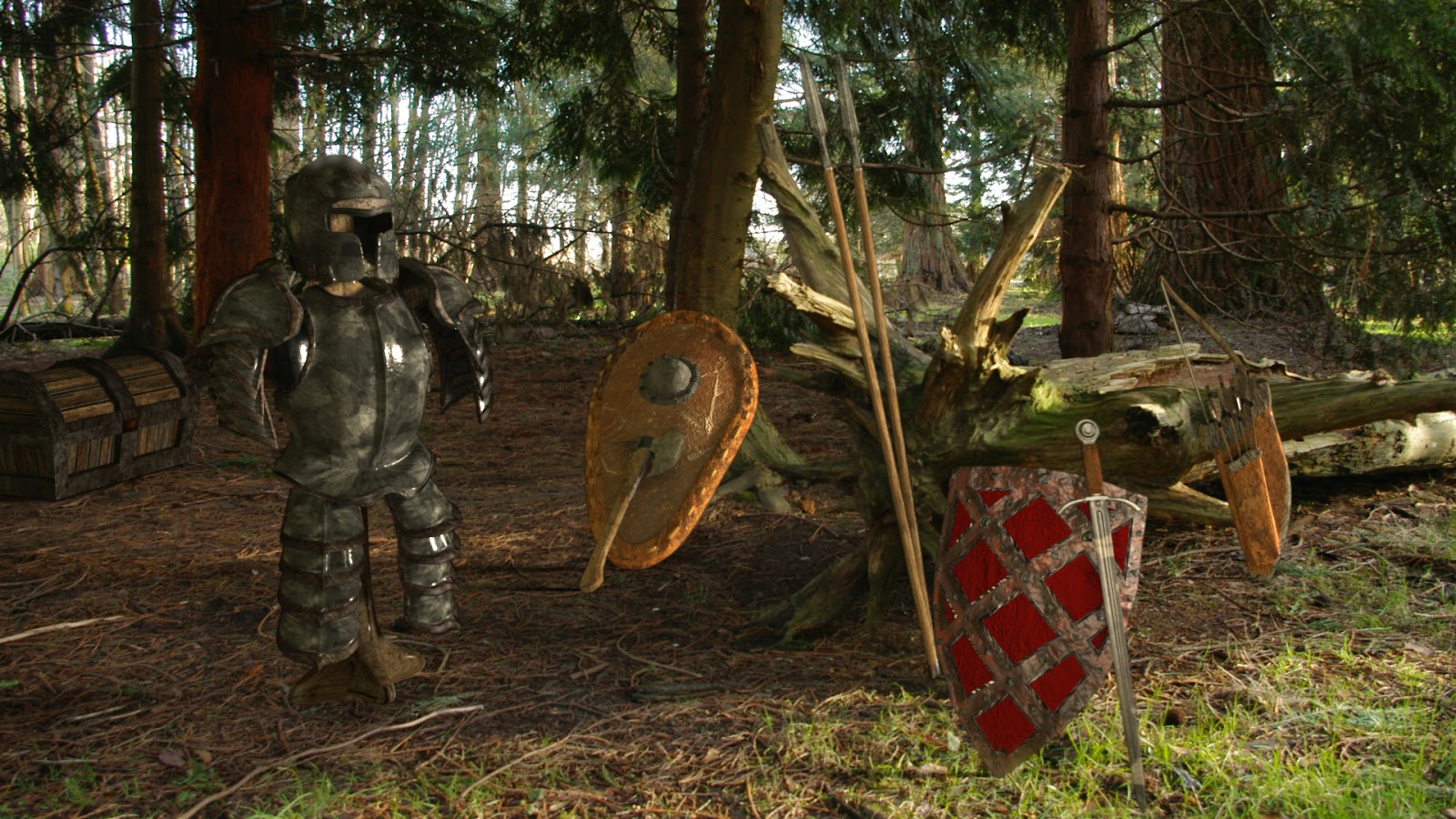 In the end I took out the model of the shoes out of the scene because they didn't feel right, they were made in a different style, more cartoony, so they seemed inappropriate in a photo-real environment.

Took me a lot of time, to model everything, texture everything, set the shaders, the scene, the lights, the render passes...
Thanks a lot to our teacher Matt! For a big help with the composition in Nuke.
And Felix from Game Design course, for the initial help with the scene in Maya.
I love it.

STORY BEHIND THE SHOT 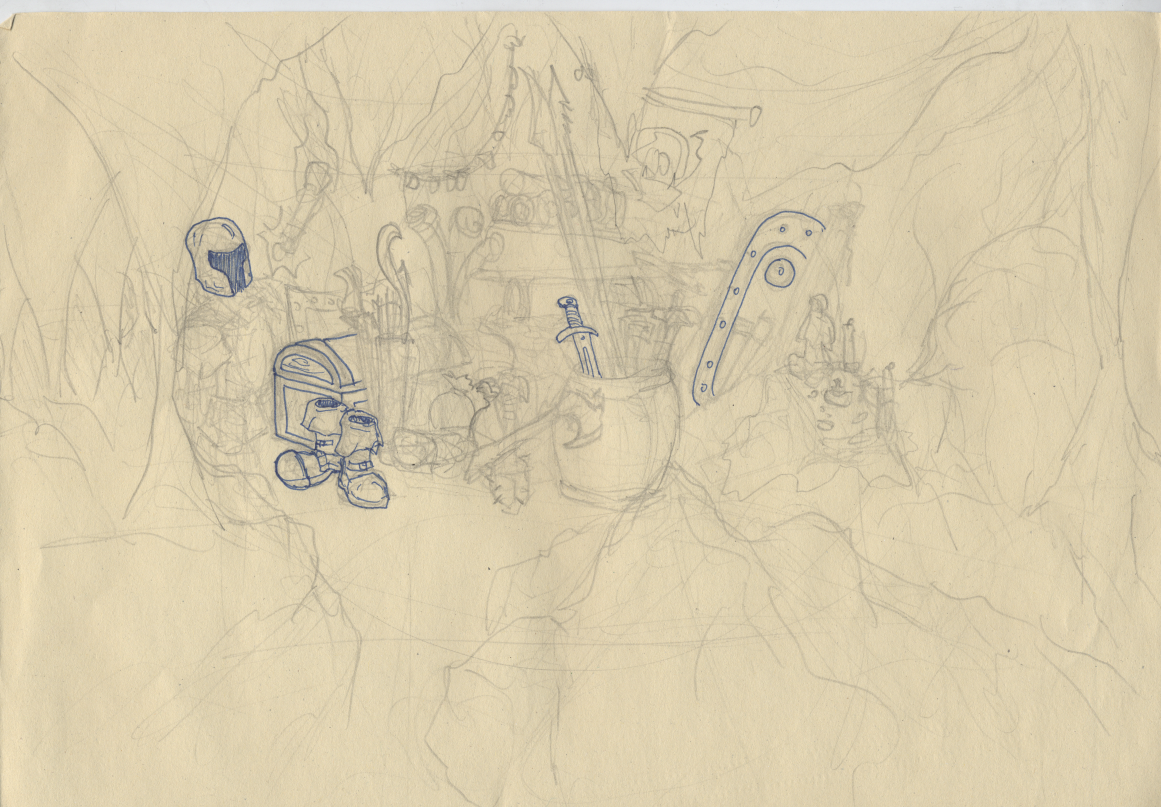 My first idea was simply to create a cave full of weapons, equipment and armor. It belongs to a warrior who stores all the items there to hide them from anyone to steal - like a treasure cave.
I had to change this idea, because I could not find a cave of which I could take a decent picture and it will be probably very problematic because of the lighting setting in the dark cave.

Later on I wanted the shot to be set in a castle, so I took several pictures of a castle wall.

But in the end I decided the shot to take place in the forest, for various reasons - the forest pictures are beautiful, it was a good day to take photos, the setting is appropriate and it fits nicely the style.

Story script and description of the story my shot is a part of:

The Sun was setting and daylight was draining away when the battle finally ended and Donag was absolutely exhausted. He was barely walking, his shield just dragging behind him. He was just about to fall down on the ground and fall asleep. Fortunately, he made it to the forest where their base camp was set.  The warrior set down on the forest grass and took his weapons off the belts, leaning them against the surrounding trees. Then he took off his helmet and his armour, placing every part on a wooden armour stand so it could dry properly without getting rusty if lying on the ground.

Donag, son of Grakmal survived a victorious battle without any significant wounds. He earned his soldier’s pay. He was part of a mercenary group called Saber Spark Clan, which was hired to search and destroy advanced guards of the Royal army, marching north to siege the Emperor’s castle Kragenburg. Saber Spark Clan chose a great place for an ambush, they hid alongside a road through the Orum forest and waited for the advanced guard to march there, falling into their trap. The chieftain of the mercenary group, Big Hurgal, planned the attack very carefully, first they showered the Royal army with arrows and cross-bow bolts, Donag brought down two riders and one foot soldier with his bow. Then two ways of attack ran down the hill on the road to hit the survivors who hid behind their shields and wagons. Even after the initial attack, the Clan was still outnumbered. The Royal army soldiers were tough, many of Donag’s comrades were not as fortunate as he was.  But that is the life of mercenary – ‘if you wanna earn your pay, you gotta fight and also survive,’ were favourite words of the chieftain Big Hurgal.  On the other hand, Donag did not had to share the pay with too many soldiers anymore, he did not care about the newbies and kids who were in the Clan only to chase fame.

The Saber Spark Clan set the camp deep in the forest, few miles from the battlefield, so when the battle was over, not only they had to hide all the bodies and tracks and get rid of all the evidence of the skirmish, but also they had to march through a thick forest in full armour before they could finally rest.

Donag finished placing parts of his armour on the stand. The wooden stand is part of the equipment the Mercenaries carry with them on their wagons same as tents, barrels with water, crates with provisions and other warfare supplies. His weapons were placed against the side of the trees, he thought he would check and sharpen them later. Now he just went straight towards the bonfire in the centre of the camp, where the Clan members were sitting around, eating roasted pork, treating and healing wounds, drinking stolen royal red wine and planning what they would buy when they got paid. They already got paid a small sum up front, but the deal was to get the rest of the money when the job would be done.  Nobody in the Clan, not even Big Hurgal, knew that they will have to go through much more trouble to get their money.

Their client – Sir Yoset von Abersdaal, who’s army was on the march to defend the Emperor’s castle Kragenburg, was critically running out of gold, because he had to finance his army’s complete weaponry and the Blacksmiths Guild raised its prices during the wartime. Donag and the Clan did not expect anything good coming from Sir Yosen, but they had no idea they will have to turn against him so quickly and fight alongside the Royal Army, so they will finally force Sir Yosen to borrow more money from the Emperor to buy the Saber Spark Clan back on their side.

-          Dominik Urban
- This story was written in 20 minutes while waiting for rendering, I made it up out of blue, only slightly influenced by movies Berserk Golden Age Arc and a book Orc’s Claw by Michal Spacek. 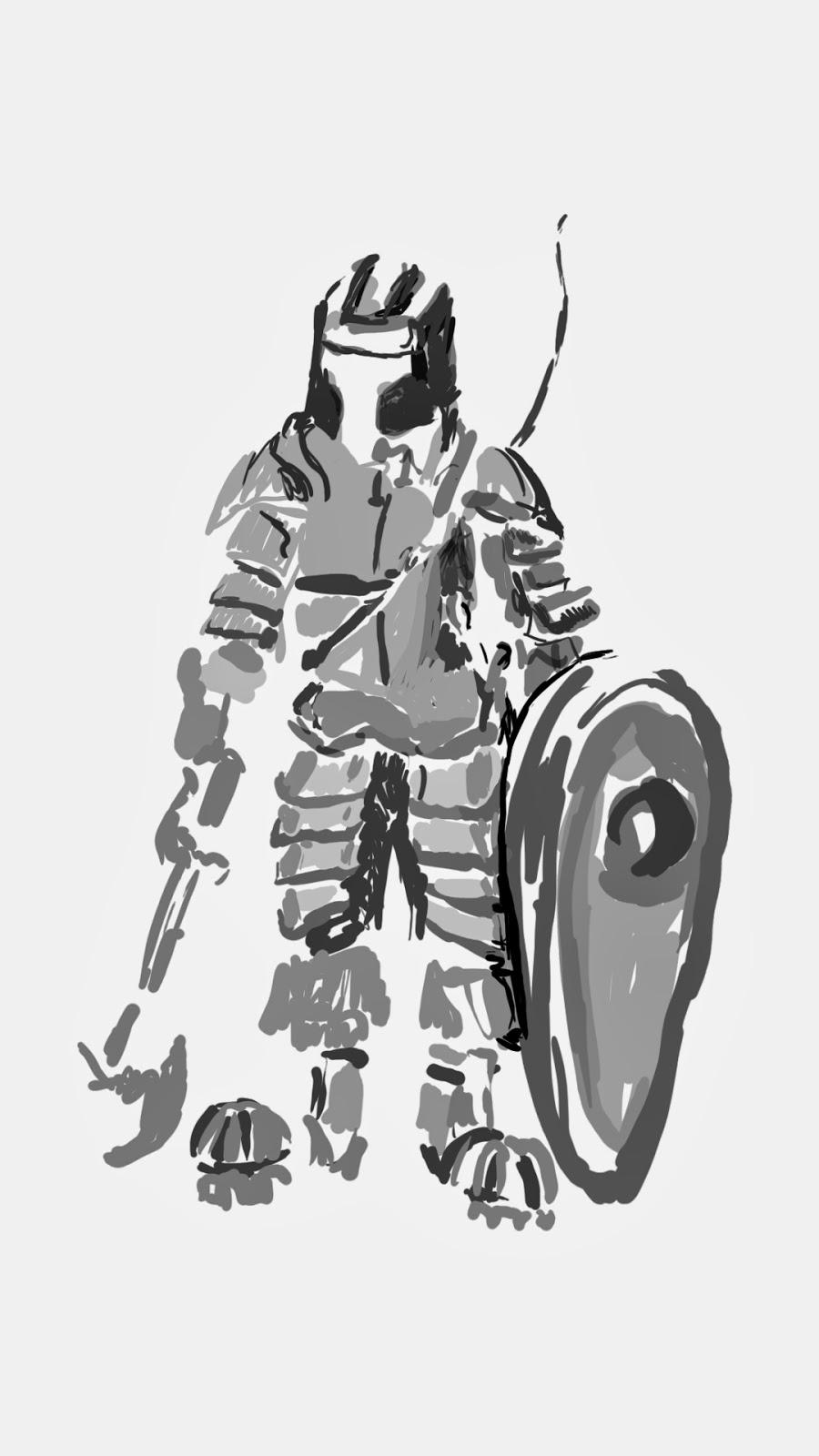 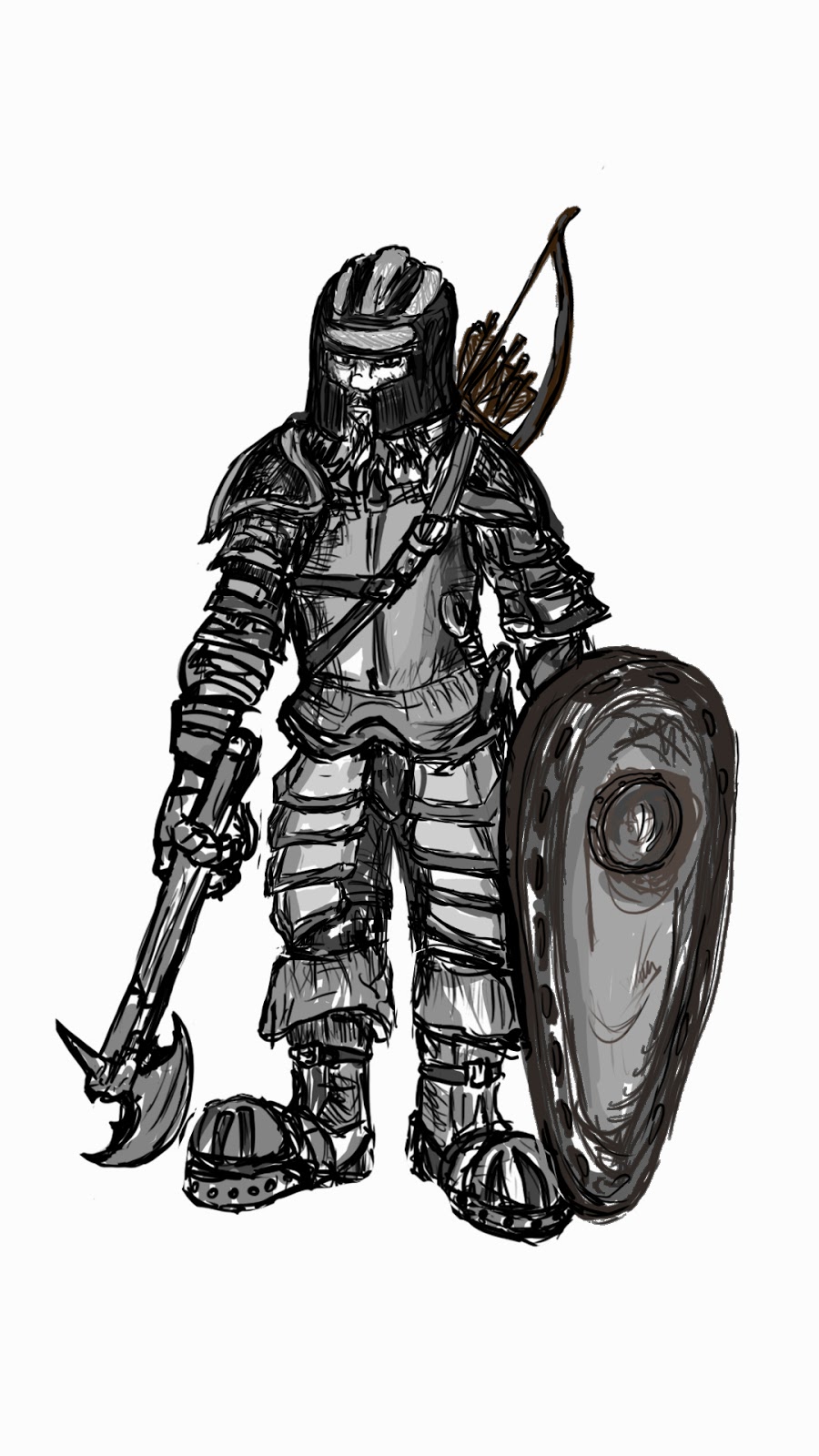 1) - Donag, the owner of all the weaponry and armour, walks in the scene, he is carrying most of the weapons , the rest is already in the forest.
2) - He places his weapons against the surrounding trees and the fallen tree, sits down and takes off his armour, placing every part of it on the armour stand.
3) - He walks away to the left side of the screen to get to the bonfire to eat, drink and discuss the battle and further plans with his comrades. 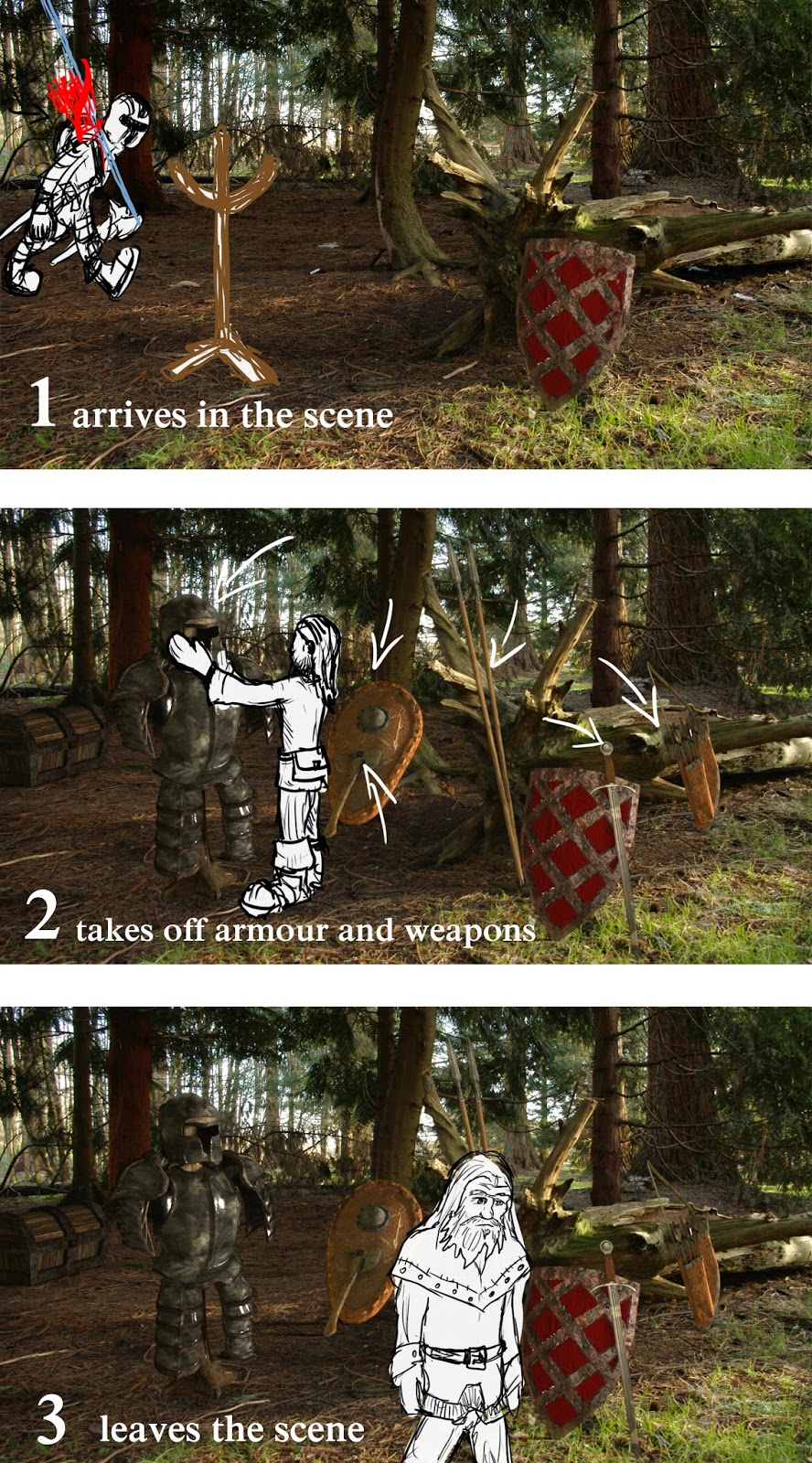 Posted by Dominik Urban at 9:17 PM